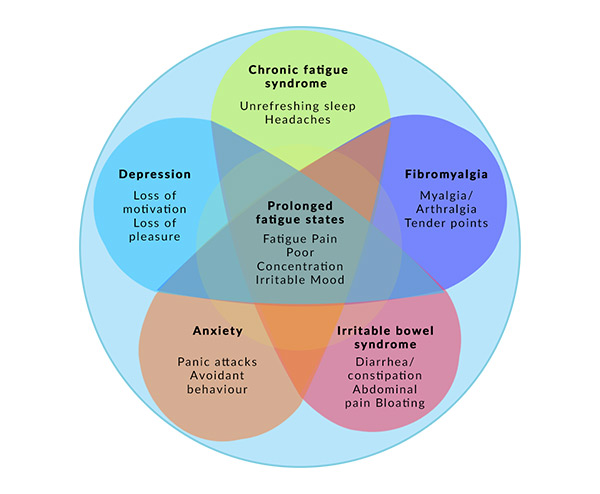 The earlier a person with CFS/ME receives medical treatment, the greater the likelihood that the illness will resolve. Equally important, about 40% of people in the general population who report symptoms of CFS/ME have a serious, treatable, previously unrecognized medical or psychiatric condition (such as diabetes, thyroid disease, substance abuse). CFS/ME is a serious illness and poses a dilemma for patients, their families, and health care providers.

Researchers continue to explore possible causes and risk factors for CFS/ME. Many questions remain, but there are some characteristics that may help indicate who most at risk is for CFS/ME:

Diagnosing chronic Fatigue Syndrome/ Myalgic Encephalopathy (CFS/ME) can be complicated by a number of factors:

These factors have contributed to an alarmingly low diagnosis rate.

Because there is no blood test, brain scan or other lab test to diagnose CFS/ME, it's a diagnosis of exclusion. Your health care professional will first take a detailed patient history, including a review of medications that could be causing your fatigue. A thorough physical and mental status examination will also be performed. Next, a battery of laboratory screening tests will be ordered to help identify or rule out other possible causes of your symptoms. Your professional may also order additional tests to follow up on results of the initial screening tests.

Unexplained, persistent fatigue that's not due to ongoing exertion, isn't substantially relieved by rest, is of new onset (not lifelong) and results in a significant reeducation in previous levels of activity.

Four or more of the following symptoms are present for six months or more:

Due in part to its similarity to acute or chronic infections, CFS/ME was initially thought to be caused by a virus infection (i.e., Epstein-Barr (EBV) mononucleosis). It now seems clear that CFS/ME is not caused exclusively by any single recognized infectious disease agent. CDC's four-city surveillance study found no association between CFS/ME and infection by a wide variety of human pathogens, including EBV, human retroviruses, human herpesvirus 6, enteroviruses, rubella, Candida albicans, and more recently bornaviruses and Mycoplasma. Taken together, these studies suggest that among identified human pathogens, there appears to be no causal relationship for CFS/ME as a whole. However, the possibility remains that CFS/ME may have multiple causes leading to a common endpoint, in which case some viruses or other infectious agents might have a contributory role for a subset of CFS/ME cases. Recently published research suggests that infection with Epstein-Barr virus, Ross River virus and Coxiella burnetti will lead to a post-infective condition that meets the criteria for CFS/ME in approximately 12% of cases. The severity of the acute illness was the only factor found to predict which individuals would have persistent symptoms characteristic of CFS/ME at the six-month and one-year period following infection.

It has been proposed that CFS/ME may be caused by an immunologic dysfunction, for example inappropriate production of cytokines, such as interleukin-1, or altered capacity of certain immune functions. One thing is certain at this juncture: there are no immune disorders in CFS/ME patients on the scale traditionally associated with disease. Some investigators have observed anti-self antibodies and immune complexes in many CFS/ME patients, both of which are hallmarks of autoimmune disease. However, no associated tissue damage typical of autoimmune disease has been described in patients with CFS/ME. The opportunistic infections or increased risk for cancer observed in persons with immunodeficiency diseases or in immunosuppressed individuals is also not observed in CFS/ME. Several investigators have reported lower numbers of natural killer cells or decreased natural killer cell activity among CFS/ME patients compared with healthy controls, but others have found no differences between patients and controls.

T-cell activation markers have also been reported to have differential expression in groups of CFS/ME patients compared with controls, but again, not all investigators have consistently observed these differences. One intriguing hypothesis is that various triggering events, such as stress or a viral infection, may lead to the chronic expression of cytokines and then to CFS/ME. Administration of some cytokines in therapeutic doses is known to cause fatigue, but no characteristic pattern of chronic cytokine secretion has ever been identified in CFS/ME patients. In addition, some investigators have noted clinical improvement in patients with continued high levels of circulating cytokines; if a causal relationship exists between cytokines and CFS/ME, it is likely to be complex. Finally, several studies have shown that CFS/ME patients are more likely to have a history of allergies than are healthy controls. Allergy could be one predisposing factor for CFS/ME, but it cannot be the only one, since not all CFS/ME patients have it.

Multiple laboratory studies have suggested that the central nervous system may have an important role in CFS/ME. Physical or emotional stress, which is commonly reported as a pre-onset condition in CFS/ME patients, activates the hypothalamic-pituitary-adrenal axis, or HPA axis, leading to increased release of cortisol and other hormones. Cortisol and corticotrophin-releasing hormone (CRH), which are also produced during the activation of the HPA axis, influence the immune system and many other body systems. They may also affect several aspects of behavior. Recent studies revealed that CFS/ME patients often produce lower levels of cortisol than do healthy controls. Similar hormonal abnormalities have been observed by others in CFS/ME patients and in persons with related disorders like fibromyalgia. Cortisol suppresses inflammation and cellular immune activation, and reduced levels might relax constraints on inflammatory processes and immune cell activation. As with the immunologic data, the altered cortisol levels noted in CFS/ME cases fall within the accepted range of normal, and only the average between cases and controls allows the distinction to be made. Therefore, cortisol levels cannot be used as a diagnostic marker for an individual with CFS/ME. A placebo-controlled trial, in which 70 CFS/ME patients were randomized to receive either just enough hydrocortisone each day to restore their cortisol levels to normal or placebo pills for 12 weeks, concluded that low levels of cortisol itself are not directly responsible for symptoms of CFS/ME, and that hormonal replacement is not an effective treatment. However, additional research into other aspects of neuroendocrine correlates of CFS/ME is necessary to fully define this important, and largely unexplored, field.

Rowe and coworkers conducted studies to determine whether disturbances in the autonomic regulation of blood pressure and pulse (neurally mediated hypotension, or NMH) were common in CFS/ME patients. The investigators were alerted to this possibility when they noticed an overlap between their patients with CFS/ME and those who had NMH. NMH can be induced by using tilt table testing, which involves laying the patient horizontally on a table and then tilting the table upright to 70 degrees for 45 minutes while monitoring blood pressure and heart rate. Persons with NMH will develop lowered blood pressure under these conditions, as well as other characteristic symptoms, such as lightheadedness, visual dimming, or a slow response to verbal stimuli. Many CFS/ME patients experience lightheadedness or worsened fatigue when they stand for prolonged periods or when in warm places, such as in a hot shower. These conditions are also known to trigger NMH. One study observed that 96% of adults with a clinical diagnosis of CFS/ME developed hypotension during tilt table testing, compared with 29% of healthy controls. Tilt table testing also provoked characteristic CFS/ME symptoms in the patients. A study (not placebo-controlled) was conducted to determine whether medications effective for the treatment of NMH would benefit CFS/ME patients. A subset of CFS/ME patients reported a striking improvement in symptoms, but not all patients improved. A placebo-controlled trial of NMH medications for CFS/ME patients is now in progress.

Because CFS/ME can resemble many other disorders, it's important not to self-diagnose CFS/ME. It's not uncommon for people to mistakenly assume they have chronic fatigue syndrome when they have another illness that needs to be treated. If you have CFS/ME symptoms, consult a health care professional to determine if any other conditions are responsible for your symptoms. A CFS/ME diagnosis can be made only after other conditions have been excluded.

It's also important not to delay seeking a diagnosis and medical care. CDC research suggests that early diagnosis and treatment of CFS/ME can increase the likelihood of improvement.

The cause or causes of CFS/ME remain unknown, despite a vigorous search. While a single cause for CFS/ME may yet be identified, another possibility is that CFS/ME represents a common endpoint of disease resulting from multiple precipitating causes. As such, it should not be assumed that any of the possible causes listed below has been formally excluded, or that these largely unrelated possible causes are mutually exclusive. Conditions that have been proposed to trigger the development of CFS/ME include virus infection or other transient traumatic conditions, stress, and toxins.

A medication originally used in dermatological conditions holds promise for certain CFS/ME patients. Kutapressin is an extract of liver, and current physicians, including Dr. Charles Lapp, feel that it "has a place in the treatment of CFS/ME...particularly if there is evidence of viral activation." In the test tube, Kutapressin can suppress herpetic viruses, and even the so-called "spuma" virus in CFS/ME.

The speculation is that it not only works as an anti-viral drug, but also as an immune modulator affecting the cytokines. Most patients require 60 to 80 doses of the drug before any improvement may be noted, according to a study by Dr.'s Thomas Steinbach and William Hermann. These physicians, says Dr. Lapp, "...have done a great service to bring this drug to our attention." Kutapressin, according to Dr. Lapp, "is the only available medication that has such a success rate in the treatment of CFS/ME."