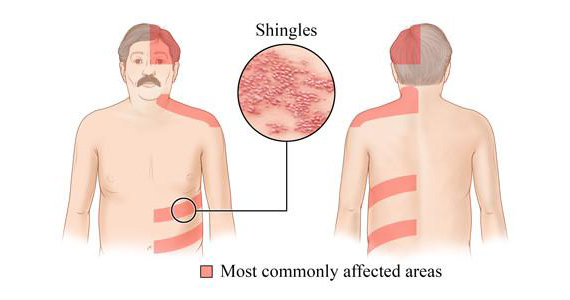 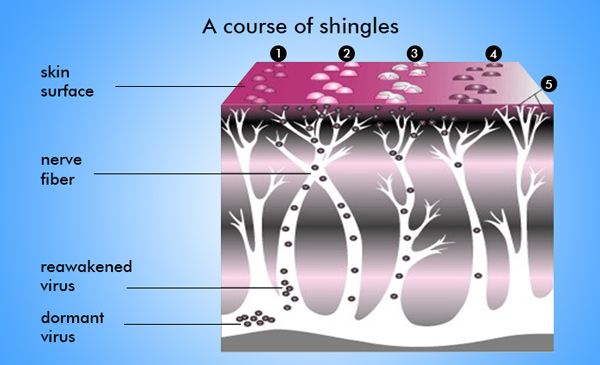 Shingles is a skin rash caused by the same virus that causes chickenpox. This virus is called the Varicella zoster virus (VZV) and is in the Herpes family of viruses. After an individual has chickenpox, this virus lives in the nervous system and is never fully cleared from the body. Under certain circumstances, such as emotional stress, immune deficiency (from AIDS or chemotherapy), or cancer, the virus reactivates and causes shingles. In most cases of shingles, however, a cause for the reactivation of the virus is never found. Anyone who has ever had chickenpox is at risk for the development of shingles, although it occurs most commonly in people over the age of 60. It has been estimated that up to 1,000,000 cases of shingles occur each year in the U.S.

Before a rash is visible, the patient may notice several days to a week of burning pain and sensitive skin. When the characteristic rash is not yet apparent, it may be difficult to determine the cause of the often severe pain. Shingles rash starts as small blisters on a red base, with new blisters continuing to form for three to five days. The blisters follow the path of individual nerves that come out of the spinal cord (called a dermatomal pattern) and appear as a band- or belt-like pattern on an area of skin. The entire path of the affected nerve may be involved, or there may be areas with blisters and areas without blisters. Generally, only one nerve level is involved. In a rare case, more than one nerve will be involved. Eventually, the blisters pop, and the area starts to ooze. The affected areas will then crust over and heal. The duration of the outbreak may take three to four weeks from start to finish. On occasions, the pain will be present but the blisters may never appear. This can be a very confusing cause of local pain.

Shingles is contagious. Shingles can be spread from an affected person to children or adults who have not had chickenpox. But instead of developing shingles, these people develop chickenpox. Once they have had chickenpox, people cannot catch shingles (or contract the virus) from someone else. Once infected, however, people have the potential to develop shingles later in life. Shingles is contagious to people that have not previously had chickenpox, as long as there are new blisters forming and old blisters healing. Similar to chickenpox, the time prior to healing or crusting of the blisters is the contagious stage of shingles. Once all of the blisters are crusted over, the virus can no longer be spread.